The first Spanish expeditions coming to explore Chile from Peru used the Inca Trail through the Cordillera de Los Andes and settled initially in the Copiapó Valley, located in the North of Chile, on the southern edge of the Atacama desert, the most arid area of the planet.

The Manflas River is one of the three tributaries of the Copiapó river, located in the high section of the Valley, 120 km from the city of Copiapo, at an altitude of 1,500 meters above the sea level. This place was named by the Incas as the enchanted Valley in honor to the colour and Majesty of the mountains that surround it. Historically, this mountainous area was characterized for being poorly populated and mainly dedicated to the extensive and not so efficient cultivation of pastures for the production of meat.

At the end of the seventies started in Copiapo, an impressive growth of table grape plantations, taking advantage of the special climatic conditions of the Valley for the production and export of “primores” (early grapes).

The small town of Manflas, with poor access and long distances from the sources of labor and supply of inputs and services, transformed it´s agricultural project in a challenge of major proportions. The first table grapes were planted in 1981 by Agricola Manflas Ltda. This company was established in 1980 by two agronomists and friends, Félix Susaeta and Ricardo Corssen, the same year they bought the Hacienda Manflas with it´s 500 potential hectares for the cultivation of grapes and 130,000 hectares of mountains.

Twenty years of hard work and high investments in infrastructure (roads, houses, irrigation system, electric energy, packing and cooling equipments) were necessary to transform this land in 150 hectares of vines with productions over 300,000 of 8.2 kg boxes which in the future may increase to 400 hectares with a production above 800,000 boxes.

Desert conditions (very low humidity) and the climate with high temperatures, transparent skies and high luminosity throughout the year, together with the quality of the irrigation water from the Manflas River, with low salinity and no pollution, make it possible to harvest “primores” in all the varieties planted (Thompson Seedless, Black Seedless, Superior, Red Globe, Prime, Midnight Beauty, Scarlotta, Timco and Allison). Manflas fruit is well known in the destination markets not only for early arrivals, but also for the consistency of its quality.

The remoteness and isolation of Manflas and its clean environment with moderate winds, allow to manage the crop, based on Spanish vineyards on piedmonts, with modern irrigation systems and fertirrigation, without the use of special pest protection, under an integrated pest control system that reduced by close to 100% the use of insecticides.

In order to create the best possible quality of life conditions for those who work
on the farm (101 men and 77 women in 64 surveyed houses, according to the Census of 2002), we have developed a self-contained village, which has all the infrastructure to meet the needs of workers and their families, such as: a school of basic education, were training courses are also offered for workers , a nursery school to cater our children, a multidisciplinary room for the use of the workers, private kiosks and dinnig room, in addition to free water, electricity and mobilization for transportation to urban centres. The main concern has been to work with the latest technology available and an excellent work environment, focused on obtaining the maximum quality and uniformity of our product until arrival to the destination markets. 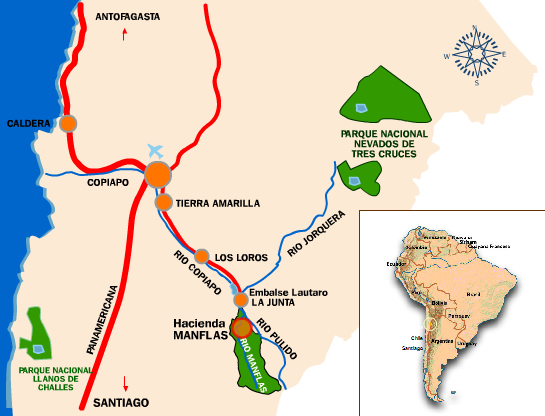